All right, everyone, put on your mystic foresight caps, because we’re about to take a trip into the future to see exactly which trends are hot in 2013. Ready? Wait, you don’t have a mystic foresight cap, and you can’t see into the future? Weird. Guess we’ll do this the old fashion way: predicting 2013 web design trends based off current design progressions. Let’s get into it. 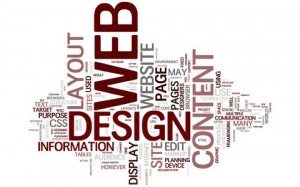 Something about 2012 saw designers blowing up images and text to previously unprecedented sizes. Now, banners take up half of the fold, while pictures are now the size of content areas. And let’s not even get into the text that’s large enough for your grandmother to read it from across the street. It’s absolutely excessive – but it’s also absolutely awesome, when correctly implemented. From photo backgrounds to full-size sliders, oversized assets are going to be strong during 2013.

There’s a fine line between a simplified design and an oversimplified one. A simplified design focuses on relaying information via a web design that contains as few assets as possible, even using a lot of white space. This keeps users focused on engaging the website, rather than getting lost in the sites interface. And these kind of simplified websites have seen a huge response during 2012, leading us to believe they’ll see an even bigger response during the upcoming year. Keep designs simple so as to satisfy users, but don’t oversimplify to such a point that it’s detrimental.

Basically, skeuomorphism is the act of making one thing look like another thing, for the sake of visual representation. For example, the folders used in most Windows operating systems are not actually folders, but this image conveys their purpose. Another example is the iPhone calendar designed to look like a leather-bound desk calendar – not necessary, but it eases the user into the application. And you better believe we’ll be seeing a lot more skeuomorphism in the future, as it’s pretty much Apple’s go-to design concept. They love having their digital products look like real-world items.

This is a given, because users now access websites from their computer, mobile phone, and tablet, all in the same day. Having a unique design for each device would be a nightmare, whereas creating a responsive web design – one that changes depending on which device is accessing the site – makes the whole process of creating a site much, much easier. And it’s awesome to see a website change depending on the device viewing it. We recommend messing around with responsive web design for a while before building a whole new site for 2013.